This was home for the Herman and Miina Hanka family for 70 years. Mari and Nik, the eldest daughter and son, lived here until they passed away in their early 40’s in 1921 and 1923 respectively. Herman passed away at the age of 84 in 1933, Miina, at the age of 92 in 1942. Lydia and Hjalmer, sister and brother, lived here together until Lydia passed away at the age of 67 in 1958, and Hjalmer lived here for another 8 years until his death in 1966. The home also provided shelter for a grandson, Arvo, who was born to Mari in 1899, until he married and established his own family. Arvo had ten children and there are many Hankas alive today. 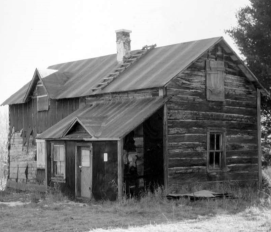 The Hanka house is a one and one-half story pine and spruce log structure that is built in two sections. The first, which measures seventeen feet by twenty-two feet was built to satisfy the homestead requirements. The one and one-half story addition to the west contains the kitchen and second floor bedroom. Full dovetail corner notches and tightly fitted logs distinguish the house as Scandinavian in origin. Dormers of Finnish and Swedish tradition are used on the north roof. Two enclosed porches of frame construction increase the floor space of the house for pantry and clothes storage. The interior bare log walls were eventually covered with blue building paper or calcimate whitewash. Floors are of ramdom width pine boards and were scrubbed clean. The chimney rests on a two inch pine plank cabinet in the kitchen. The original foundation of vertical pine posts eventually became replaced by mortared igeneous rocks. Sawn shingles are nailed to rough sawn one inch random pine boards. Store bought window assemblies with two-over-two light window sash are used. Every conceivable wood piece used in the building could be made from logs with either an axe or an adz including the roof sheathing, flooring, doors, pegging in the walls, and latches. ('Askel' Means Step by Gene Meier)

is the date on the back of this photograph. To the far left we see the cattle barn and to its right we see the covered drive through. To the left foreground is the garage and to the immediate right is the Hanka house. Mature full grown poplar trees stand behind the house. To the right of the house, in the background, is the sauna and to the far right is the granary (aitta). Unseen, but to the immediate left of the photographer is the log horse stable and to the left of the stable is the log chicken coop.