There comes a time when one wonders where they came from and what makes them what they are.

This page is for stories, tales, and documentaries written by the friends, relatives, and descendants of area immigrants, so as not to get lost or fade in the passage of time, and can be read by present and future generations. The subject material can be just about anything, but should coincide with the Hanka Homestead Finnish Museum’s mission.

Submit your story to " EdRaisanen@HankaHomesteadMuseum.org " or send it to the address on the Contact Us page. The story can be typed, hand written, in English or Finnish, and include the author’s name. Name will not be posted if so requested.

By submitting your story you consent to the publishing of your story on this web site after its approval by the Hanka Homestead Finnish Museum. Thank you for participating in our mission.

In her own words.

There is very little information on the Victrola & vinyl record collection belonging to my grandparents which I donated to the Hanka Homestead Finnish Museum. I have the same regrets we all do for the questions not asked before our loved ones passed. A 1910 census report listed my grandparents & two aunts born in Finland & an uncle born in Michigan. I found a copy of a certificate where my oldest aunt became an American citizen in 1937 when she was 37 years old. But that doesn't tell the whole story. Luckily, our daughter & her husband were visiting us last week. Her grandmother (my mother) told her the story that I was trying to verify, that her great grandfather came from Finland, worked in the Superior copper mine behind Dodgeville to earn enough money to send for his wife & 2 daughters. They came as passengers, not steerage, & Grandma had a hard time keeping track of the little girls, not wanting them to spill overboard. They lived in the Superior location & in Painsdale. 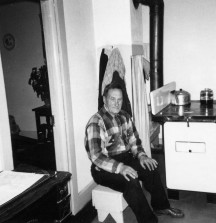 Grandpa Taipale continued working in the mine until he earned enough money to buy land on Emily Lake Road near Twin Lakes. He cleared the land to build a dairy farm. He built a sauna, a privy, a two-story home, a woodshed, a cobbler's shed, a huge barn for storing hay & housing cows. The home, privy & woodshed were at the top of the hill, and the rest of the buildings followed each other downhill to the barn on flat land. 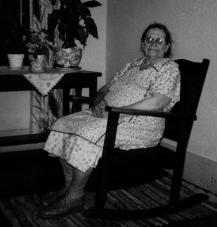 Grandma Taipale had a large kitchen sink with a hand pump. Drinking water was fetched from a spring across a field, in the woods. Grandma worked with a wood stove, a cabinet with a built-in flour sifter & a 54-inch square farm table with 5 legs. When I was a child, my parents, Fred & Ellen Sibilsky, managed Twin Lakes County Park, now a state park, so I spent a lot of time with my grandparents. I remember playing & napping under the farm table with its Montgomery Ward label. My husband restored our table & someday our oldest granddaughter will inherit it. A cream separator & stairs to the root cellar were in a small room off the kitchen. Above, were the steep stairs to the 2 bedrooms. Back in the kitchen, Grandma made Viili with cream on top. It was so good; it took me forever to like modern yogurt. We held our noses when she prepared Lutefisk for the Christmas holidays.

In the living room, my grandparents each had a rocking chair. I took the photo of my grandmother sitting in her rocking chair under a print of "Whistler's Mother" where she often crocheted. Opposite of their rockers was a table covered with a velvet cloth with long fringes which I liked to braid. On the table was a huge Finnish Bible & a mantel clock. Back in the day, this may be where they set the Victrola, to pass the time listening to music on cold winter evenings. In my time with them, it was stored in one of the bedrooms along with their stereoscopic picture viewer. In the corner of the room was a secretary with a curved glass door on the left half. A mirror was on top of the right half & below was a door that dropped down for writing & cubby holes for writing supplies.

Another treasure I have are my grandma’s golden earrings. The appraiser on Antique Roadshow said they were 18 carats gold & had a Finn mark on them.  They will soon go to my grandparents great-great-great granddaughter who is 9 years old. Her mother wore them for her wedding.

My mother talked about growing up with three brothers where she did whatever they did including skiing off the barn roof on skis Grandpa made. Her older sisters were off & married at a young age.

This article has been an interesting journey down memory lane. Thank you for asking me to write it. It has given me a greater understanding & appreciation for my grandparents.

This story’s time line is during World War ll and is by the man my mother married a few years after her first husband (my father) passed and I, at seventeen, had long left to conquer the world. I’m sure there are many such stories as one only has to read the names on the honor rolls in the communities of the Copper Country to realize the contribution made by Finnish Americans to protect our freedoms.

I do not remember him very well from my younger years, but upon my retirement and returning to the Copper Country I got to know him a little better. He passed away two weeks before his one hundredth birthday and circumstances dictated I clean out his remaining belongings from the home he shared with my mother. Back in a far corner of a closest in a weathered box I came across this poem/letter tucked between the pages of an Army reunion book along with several other treasured items which I presented to his daughter (my half-sister). It is with her permission and blessing I post his poem/letter to these pages.

In his own handwriting by Joel Marttila​, Italy 1944 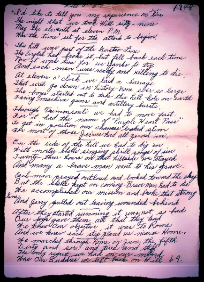 I’d like to tell my experience on line the night that we took Hill sixty-nine May the eleventh at eleven P.M. was the time set for the attack to begin

The hill was part of the Gustav Line. The English had broke it, but fell back each time. Now it was time for us Yanks to try and each man was ready and willing to die.

At eleven o’clock we laid a barrage that will go down in history none ever so large. The boys started out to take this hell hole on earth facing machine guns and artillery bursts.

Through Trimonsonli we had to move fast for it had the name of “Purple Heart Pass”. To get into position our chances looked slim for most of those Jerries had all zeroed in.

On the side of the hill we had to dig in. With martar shells singing shrill songs of sin. Twenty-three hours on that hillside we stayed and many a brave men went to his grave.

Each man prayed out-loud and looked toward the sky, but the shells kept on coming – brave men had to die. We accomplished our mission and broke that strong line and Jerry pulled out leaving wounded behind.

After they started running it was not so bad. Our boys gave them all that they had. We knew our objective, it was to Rome and we knew each step placed us nearer home.

We marched through Rome on June the fifth. Dirty and sore and tired and stiff. The only regret we had on our mind was our buddies we left back on Hill 69.

People don't usually get excited about axes, but here is a story some may find intriguing. In the past few days, I have made significant discoveries... More

The History of Otter Lake

Askel, as the eastern shore of Otter Lake is called, is strictly a Finnish settlement. It has a population of... More 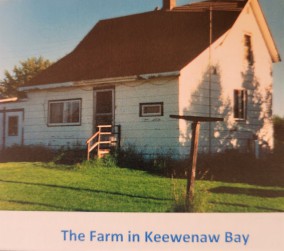 Toivo Knuuti was born to John and Elizabeth Jarvi in 1907 in Hancock, Michigan. As an infant he moved to Keweenaw Bay, Michigan. His mother died and his Aunt took him to Finland. His sister was placed in an orphanage in Houghton.

Toivo was raised in Finland, married and had four children. He served in the Finnish army during WW2. Three of four of his children were sent to Sweden during the 7 years of the war, Helge, Leila and Paul. They returned to Finland but were sent back to Sweden due to the terrible war conditions in Finland. His oldest son Wilho stayed with his mother Aune in Finland. The family experienced many hardships during the war and after the war.

John, back in the United States wanted his son and family to come to America. He sent enough money for them to take the Queen Mary from England to New York, and a train from New York to Baraga. The family sold everything they had including their home and packed one suitcase each for their new life in America. They paid their own expense to get from Finland to England.

The family thought they were going to move into their wealthy grandfather’s home on a large farm with many animals. To their surprise it was a small home and there were no beds for them and not even enough blankets and it was October, 1950.  Things did not go well and they were given $20 and told to move out.

The Keweenaw Bay community was very generous in helping the new family from Finland. They found a home to rent, donations of clothing and food were collected and soon jobs were found. They brought their SISU with from Finland and got thru the hard times.  A few years after Grandfather John died, Toivo received 40 acres and a small home on Jarvi Road.  He lived there until his death in 1981.

The four children all married and had children and went on to lead successful lives.  The farm is still owned by Paul Knuuti.

Submitted By: George Kauppila
Memoirs of Lila Kemppainnen Kauppila, in her own words. (Table of contents added)

To Those Who Read This:

These pages were written as the thoughts came to my mind; without any plans or rough sketches to... More

From: The Finnish American Reporter, April 2017 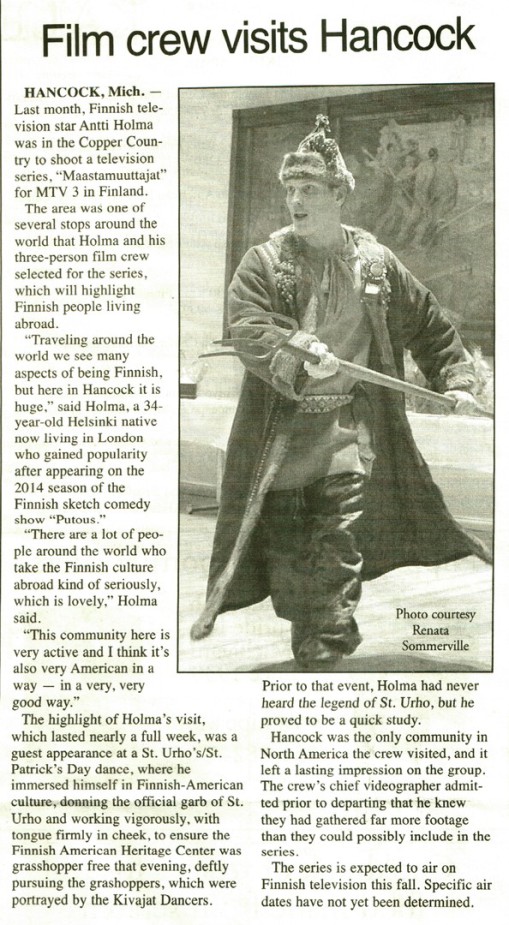 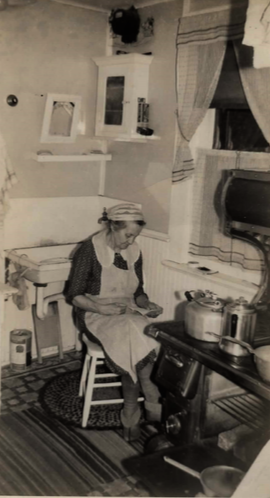 Submitted By: Sharon Ecklund​
Article: In Michigan History for Kids magazine as edited and published.
It will be published in the March/April edition (page 12) which came out in February.
Click on Article for a readable view 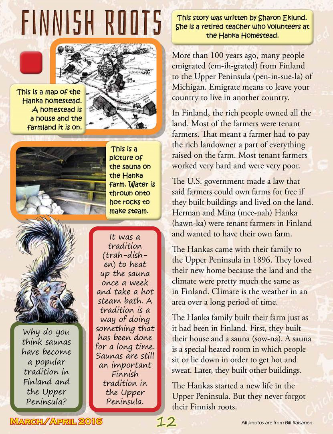 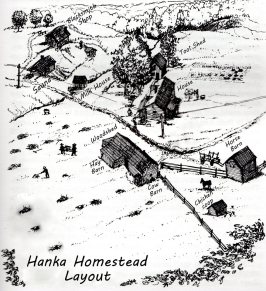 We welcome your support of a Donation or your Personal time.

Contact us directly for more details on how you can help with our mission.