CLOSED for the Season OPENING July 1, 2021 Check for Updates before Visiting 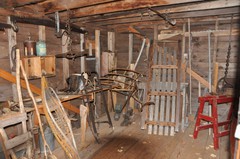 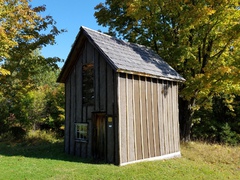 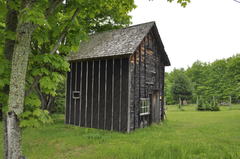 This tall building was common on Finnish farms. The upper level was used to store the grains to keep them dry and away from mice and vermin. The lower level was used to store tools, linens, and just about anything. The aitta had its roots in Finland where famine and starvation occurred especially during the 1860’s when 8 to 20% of the population (depending on the region) died of starvation. The Hanka parents, Mina and Herman, would have been witness to this deprivation and was another reason to come to America. Rye was grown on new cleared land and was used to make bread (leipä). Oats were also grown for the livestock as it was in Finland. 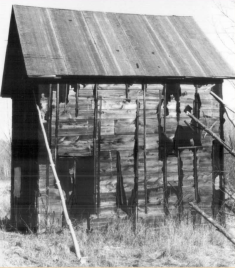 The granary (aitta) is a two story narrow two by four stud constructed storage building. Twelve feet by fourteen feet. A single layer of horizontal pine boards is the exterior siding. The roof is made of two by four rafters, pine board sheathing, and sawn shingles. Second floor window openings are mounted at each gable end. The first floor area is constructed of two inch thick planks. A single vertical board door gives access in the west wall. The floor is on joists that are free floating on the soil. A horizontal window is mounted north of the door in the west wall. An aitta is a typically Finnish free standing storage building. ('Askel' Means Step by Gene Meier)