In Finnish culture, the Savusauna was an integral part of life from cradle to grave. 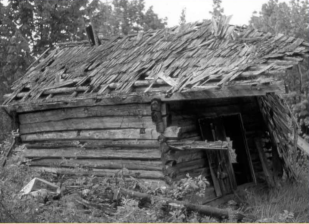 The pine, spruce, and cedar sauna, twelve feet by nineteen feet has inverted V and box corner notches. Presumably built in two stages, the sauna's form reflects one of the most ancient of Finnish sauna types, which consists of a steam room and a sheltered overhang on the gable end. Igneous and sandstone rock are used for the sauna stove. Various scrapes of steel and iron provide the framework holding up the stone top of the stove. Rough sawn planks nailed to logs resting on the bare earth serve as the floor.  Three log planks fastened to the side walls act as sauna benches at the east end of the sauna. Split cedar logs holding up three inches of soil act as the insulated low ceiling in the sauna. The two rafter plate logs and the ridge pole extend six feet to the west. Hewn poles act as rafters holding split pole roof sheathing and hand split cedar shingles. A boxed air vent with a sliding door allow the smoke to exit the room up through the ceiling. A small air vent cut into the east wall also allows the smoke to exit. One small window is mounted on the south wall close to the ground. Acess to the sauna is through a low vertical plank doorway in the west end wall. Four log joists span the room and support the split cedar log ceiling. Large igneous rocks support the sauna at the corners and along the walls. Herman Hanka's name is carved in the sauna door. There are racks made of narrow branches suspended by wires above the stove on which fish and meat are smoked. ('Askel' Means Step by Gene Meier)